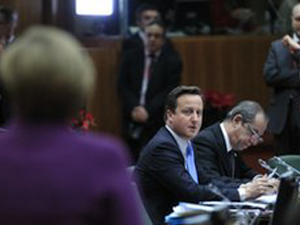 At the level of the system – how things work – it’s actually very simple: The UK is not in the Euro and should not be part of stronger arrangements to protect that currency. The necessary rigour is yet to be achieved among the Euro members but when it is it will be self-evident that the UK is not part of the mechanism and nor should it be. The whole issue is not a political question. It’s at heart a design problem – designing a currency system more robust than the storms it must endure.

Meanwhile it suited David Cameron to make a song and dance and pretend to his right wingers that he was being tough with Europe by declining to be part of a new treaty – somewhat convenient politically, but declining was the only conceivable outcome all along. The only reason it’s in doubt is because the Eurozone arrangements aren’t yet as tough as they need to be and so it still looks like the UK could perhaps accomodate them.

Rather boringly, that’s all there is to the story, but clarity doesn’t make good radio (or TV). Clarity doesn’t fill the airwaves and the column inches (or Prime Minister’s Questions), so we have lots of secondary manufactured debate – all of it off the point, and some of it rather destructive. Maybe it has entertainment value, but it doesn’t have much to do with running the country, or the world.

Seeing how things truly work in a systems sense reveals the spurious nature of much of the coverage.

Where else are we rejecting simple explanations that fit when we can explore more complicated ones that don’t?