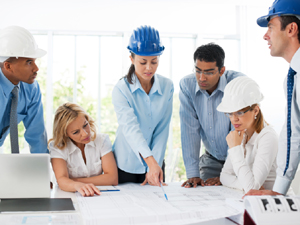 Engineers discussing a drawing always seem to get along well. It’s a great way to strengthen relationships in the team, whether within or between organisations, and often a good activity to suggest to create a conducive atmosphere—to establish the right energy in the room.

That is a frequently observed behaviour of my profession, and I saw it again last week.

There’s something about the ritual of unfolding or unrolling a large drawing of something rather complex and interesting which draws engineers together. It’s what they’re into.

Something similar is true for other professions. Looking together at work in progress or the completed article or even some kind of sample illustrating a problem all seem to have the effect of building community. And community is what we need for learning and change and growth.

Looking at a model of a new building, for example, draws people together.

How does all this work?

The key is the rapport-building effect of all standing (probably) or sitting looking at the one thing, typically rather closer together physically and mentally than would otherwise be the case, whilst various people in turn speak about what’s in front of us.

Sitting together round a table talking about information on a projection screen achieves a little of the same effect but not nearly so much.

What do you gather round when you want a special effort to build the team?

It’s sometimes worth creating some “props” specifically to make connections amongst people. That’s how board games work after all.

Maybe it’s a game to play with a board too.