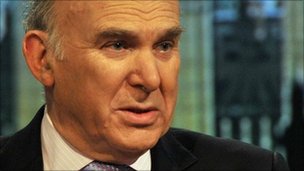 Coverage of Vince Cable on BBC News saying that the UK government hasn’t yet managed (or really chosen) to communicate to the British people that their old assumptions about economic leadership in the world are no longer valid. In short, we’re following now; not in the driving seat any more. (This shift may also be true of other developed countries.)

The most important consequence for us as individuals?