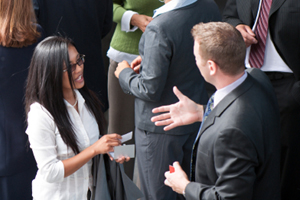 Frank isn’t interested in speaking to the man on my right. He’s not Frank’s type. He doesn’t seem relevant; he has a very different life. It doesn’t seem like he has anything that Frank needs; and Frank’s resources may not be relevant to him either.

Don’t we so often make this choice?

We speak instead to the people like us – the ones we know are fellow travelers; the ones who can obviously help us develop our ideas, and are clearly receptive to what we have to say. It’s what feels comfortable.

If we hope to encourage growth in a group of people, it may be those most different from us that we’ll influence the most, if for no other reason than the gap between us is greatest. And maybe we’ll learn the most from them too. Comfortable it may not be, and we may not know we’ve achieved anything. They may even cause us to question our assumptions!

Now, it’s good to build momentum with like-minded people; to invest our energies in those that are already on the journey. Such is the conventional wisdom for change in organizations – work with the supporters and the undecided as their momentum will carry the remaining unco-operative ones. And if it doesn’t, we’ll remove them from the scene.

In many situations, we don’t have the power, so we do need to tackle the “difficult” cases.

And maybe the “difficult” ones have the most to teach us, if we are open to what they have to offer.

But here’s the thing…

For large scale change, those may be the very people we need to influence.

Next time you’re tempted to choose the like-minded person to talk to, try engaging the individual that’s different instead. Maybe you’ll gain more.

Who do you habitually talk to – the like-minded or the unlike-minded?